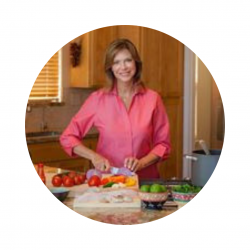 Dr. Sally LaMont is a naturopathic doctor and acupuncturist with three decades of experience in functional medicine. She specializes in using food as medicine in her practice and website, DrSallysKitchen.com.

Dr. LaMont works with a range of chronic health problems, including digestive, thyroid, adrenal and female hormone imbalances, brain fog and early dementia in her practice at the Marin Natural Medicine Clinic in Larkspur, California. She has completed the Institute For Functional Medicine’s Advanced Training in The Bredesen Protocol to Prevent and Reverse Cognitive Decline and the Buck Institute of Aging. She is passionate about identifying and reversing the drivers of chronic disease and dementia their earliest stages.

In 2001, she was honored as “Physician of the Year” by the American Association of Naturopathic Physicians for her leadership and contribution to shaping health policy in the United States. Known for her passionate delivery, Dr. LaMont has served on faculty at San Francisco State University and lectured at UCSF, Stanford, and UC Irvine and enjoys educating both the public and other health care professionals.

An additional note: Dr. LaMont had the profound experience of supporting her first husband, John LaMont, M.D., a family practitioner, through his life and death from non-Hodgkin’s lymphoma in 1992. Dr. John lived for 16 years with this cancer, and as one of the first medical doctors interested in nutrition and natural therapies, he pursued virtually all known alternative and conventional treatment modalities. Together, they explored a variety of dietary interventions, including the use of intravenous nutrients, traditional Chinese medicine and Ayurvedic medicine, in addition to conventional chemotherapy, radiation, bone marrow transplant and as a participant in the early monoclonal antibody trials at Stanford.